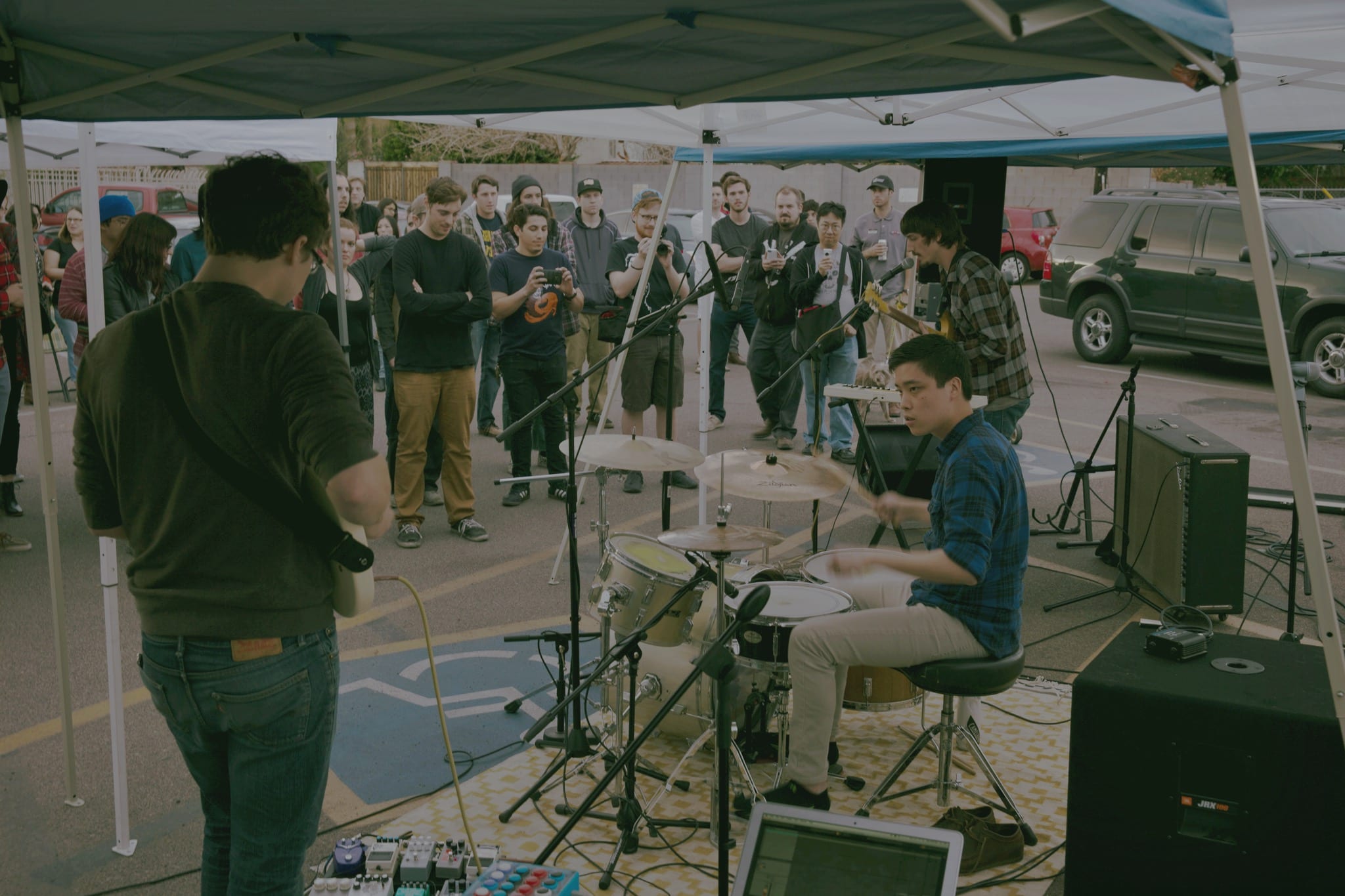 Amplifiers, guitar cases, tangled of cords and other gear were stacked up in the corner outside Stinkweeds’ patio early Saturday afternoon.

Catching their breath, a few Bear State band members and friends were making sure they had everything they needed for set-up.

Despite threats of evening rain, this brisk and cloudy Phoenix day couldn’t have seemed more warm.

Accompanied by other local bands and musicians like Fthia, Justin Moody, Dent, and Cherie Cherie, the show’s stage was coyly tucked behind the cluster of shops neighboring Stinkweeds along Camelback Road. As the afternoon went on, the parking lot quickly filled with familiar faces, eager guests, and curious onlookers. After some mingling tunes spun by other local artists Secret Attraction and Flower Festival, a heartfelt set on an acoustic guitar was played by Justin Moody.

Then, Fthia began setting up for one of the most memorable sets of the night. Jared, joined by his young son, performed ambient and instrumental arrangements. A small crowd gathered by Fthia and son to watch the boy strum on his electric guitar and mix layers by way of his dad’s floor pedals.

Knowingly or unknowingly, this spectacle of a father-son relationship, whole, thriving and creating together, was what we had all gathered for—the flourishing of families.

As the evening hours rolled on, gray clouds kept creeping in overhead while patrons enjoyed Short Leash Hot Dogs and perused through the boutiques and stores. Prepped with tents and willing hands to move gear out of the inevitable rainfall, Cherie Cherie’s dreamy, psychedelic female vocals and Dent’s experimental, lo-fi set paved the way to a satisfying end to the night.

Bear State cinched up the show performing two new singles, “Cool things” and “Dark Comedy” as well as older favorites. As a drizzling of rain came down, which quickly became a full storm, the crowd  huddled together under tends and hoods, not wanting to miss a sound.

A fitting sense of gratitude and accomplishment coursed through the the band’s fingers and guitar picks, out of the speakers and through its audience.

Thanks to Stinkweeds, merchandise sales, generous donations, support and awareness made by AZcentral, Phoenix New Times, The Spec, The State Press, and AXS, Bear State was able to donate $1,500 to FosterCare Initiatives this week.